This one's been coming for a while, folks. I'm pretty sure the same ground has already been tread by many other bloggers, but as both a gamer and someone who's going to be working with kids professionally some day, I just really needed to get this off of my chest. Bear with me.

One of the most common complaints that I've seen throughout the Old School blogging and forums community is about the monolithic 'Kids These Days.' They're too soft to accept that they automatically die if they touch the big demon face. None of them have the attention span to dedicate to 4 hours sitting down at a table without going crazy from digital withdrawal. Video games have spoiled them and now no one can use their imagination to play real games. Tabletop role-playing just isn't bright and shiny enough to drag them out of their technologically induced haze.

I'm sorry, but fuck that.

Back when I was in elementary and middle school, me and my friends were big old nerds. We played Magic, read Tolkien and Expanded Universe Star Wars novels and made our own comics set in both these worlds and our own. And before any of us got our hands on a codified rules system, we were doing our own story telling role-playing games. But we were also on the fringe of our age group. We were a minority of kids interested in fantasy and imaginary play and it stayed that way for a long time.

Right now, the most popular books for kids in America are a series of 7 fantasy novels starring a trio of young wizards fighting against an overwhelming evil while still trying to maintain grades at a magical academy. In the 13 years that the Harry Potter books have been in print, they have sold over 400 million copies, better than every edition of the Lord of the Rings and the Hobbit published over a combined 70 year period. There are hundreds of fantasy series available for kids and teens at every library and book store across America.

On top of that, kids actually have an existing framework for what role-playing games are, thanks to console and computer RPGs. Even across cultural lines, the Final Fantasy and Legend of Zelda are pretty universal. Kids as young as 6 already have an idea of how hit points, initiative and experience work thanks to Pokemon, the most popular portable game ever made. Even the most recent book in the popular children's series about cats beating each other up, Warriors, has a miniature Lone Wolf style 'Adventure Game' written into the back.

So let's not dismiss kids off hand because they wouldn't want to inch their way down a dungeon corridor. Role-playing games are really born out of the creative influences of their time and as a result, games made today are more likely to attract kids born today. Instead of bemoaning the fact that their D&D isn't like my D&D, complaining instead of participating, we could be showing kids how cool tabletop role-playing is in a milieu that they're interested in. I can't fathom a middle schooler picking up a Jack Vance or Fritz Lieber paperback today, but if your campaign world was influenced by Avatar: the Last Airbender and One Piece, you'd have a line of kids out the door who are ready for adventure.

These pictures are so awesome that I have lost the capacity for description. Courtesy of Something Awful's Strange Fanart thread. 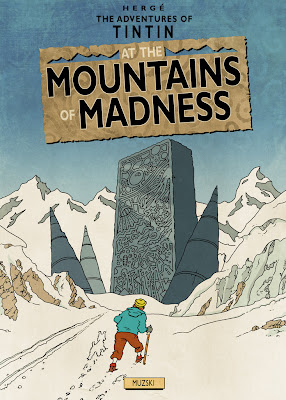 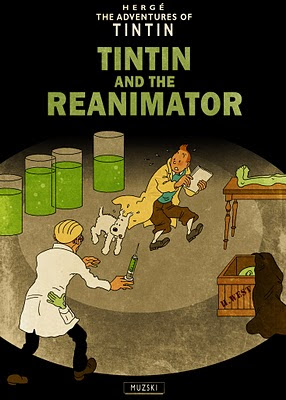 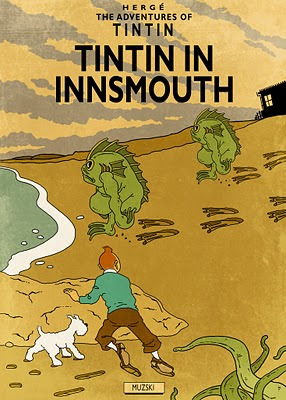 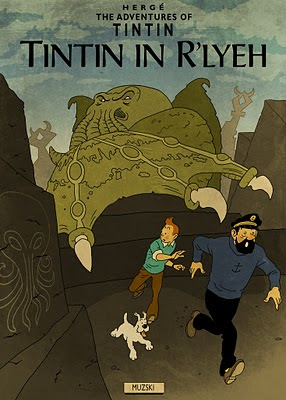 Mixtapes: I'll be your garbageman

Got three pages of my 5th grade pathfinder to go then I gotta start working on my thought paper on media literacy, so here's a bunch of music from Scott Pilgrim.

Metric (w/Brie Larson) - Black Sheep cause they won't let me embed it.

Nothing is more fun for me than anachronism. I've been trying for ages to put together my campaign ideas for a western campaign inspired by Desperado, Hard Boiled and the Spaghetti westerns I've talked about before: a game where it doesn't matter that the bad guys are coming into town on a combination of horses and old sidecar motorcycles because you've got to Fonzie slap the jukebox in the saloon into playing Misirlou before you flip-cock your Winchester and get ready to shoot someone through a plate-glass window.

(God damn I want to run this so bad)

Regardless, that's the way I feel about Gamma World. It's fantastic because of this wildly fluctuating technology level. Some communities might have a still functioning slushie machine in their local cantina and as a result, that's what the town's known for! Firefly-esque prospectors with laser rifles! Tribes of robots with rebar spears! A group of Programmers worshiping a crazed mechanical digger!

And that's why I really like the new Gamma World rules. Albeit, I've never played any of the previous editions and I'd like to get my hands on a copy of 2nd if only for the map of post-apocalyptic Allegheny County, but I like the feel. The rules support that anachronistic melange in a way that I didn't feel that Mutant Future does.

One of my favorite additions to the new set are the generic weapons (Light One-Handed Melee, Heavy Two-Handed Ranged, Light One-Handed Gun, etc...) because it levels that playing field. Under the rules, a crossbow can be as effective as a hunting rifle or a harpoon gun made out of car parts, depending on what you decide its stats are. It feels a lot more natural than either limiting characters to medieval weapons at the start or ending up dropping your trusty spear completely when you pick up a plasma rifle.

By its nature, the post-apocalypse should be off-beat. Chuck all your favorite influences into it, let 'em simmer and season with gonzo or serious to taste. But for Pete's sake, don't make it prosaic.

Picture from Six-String Samurai. If you like Gamma World and haven't seen this movie, what the hell are you waiting for?!
Posted by Jamie at 4:38 PM 4 comments:

There's only one Road. Only one good one, anyway. Chances are there was a whole network of Roads once, criss-crossing and connecting the entire West. But a lot of things have happened since then: wars, disasters, dimensional incursions, robot wars...

The Road we've got is probably pieced together from the good bits of a bunch of different ones, judging on how some stretches tend to go on beyond the turns. Most of them are either bombed out, booby trapped or overgrown enough that you couldn't get anywhere on 'em without rides built special for navigating the terrain. No way in hell that the Tankers could make their way over those cobbles. And that's why we have the Road, and the reason that it can't be broken.

Sure, you can drive your pick-up or dune buggy or hover-boat around wherever you please, but none of those things can haul worth a damn. If you really wanna get things from Point A to Point B, you gotta use something big, like one of the old tankers or a gravity barge, and if there's one thing that all those Big Rigs need, it's space and stability. But once you've got that, you need to keep it that way.

That's where the towns come in. Most of them sprung up Roadside as soon as the lines from the Coast to Vegas were being reconnoitered, but each of them soon learned the drill. If you keep your chunk of the Road free from raiding parties, burrowing sharks and giant robots, you get trading rights for the cargo coming down the Road. Depending on what Rigs are rolling, you could get anything from clothing to food to construction supplies to Dr. Goggles' Tank-Aged Frontier Whiskey. The promise of first dibs on these treasures is enough to keep the crossbows loaded and lasers charged most Roadside settlements.