So why aren't there more action movie RPGs?

I went to a used book store this weekend and ended up grabbing a handful of "men's adventure" novels from the 70s and 80s.  I'm sure that my older readers are much more familiar with names like Mack Bolan and Remo Williams than I am, but I had never seen these sublimely ridiculous one-man-against-the-Mafia pulp paperbacks out in the wild before.

As a librarian, I see a lot of different books cross my path on a day to day basis.  Alongside courtly romances and books about Draculas, I tend to see a lot of what I generally refer to as dad fiction, which runs the gamut from vigilante revenge and hardboiled detectives to special ops and pulp archaeologists.  Outside of fiction, action movies and TV shows still seem to be doing gangbusters (as the continued popularity of the USA network will tell you), so why isn't the modern action genre well-represented in RPGs?  The closest game I can think of is Feng Shui, but it's definitely more of a action movie kitchen sink that runs the gamut between Crouching Tiger and Robocop.

I want more RPGs about loose cannon cops on the edge, hard-bitten mercenaries doing the right thing, cold-hearted sons of bitches pulling off a bank heist and fortune hunters traveling the world in search of lost artifacts.
Posted by Jamie at 11:50 AM 24 comments:

Everyone has their own 'preferred' version of D&D, generally based on whatever they liked when they were twelve.  What can make this difficult is when these viewpoints clash.

I was talking with my buddy Ryan, who was the initial catalyst in running a game of D&D.  He's a complete tabletop RPG novice, but seems very eager to learn the whole process.  On top of that, he's also the person who's in charge of gathering a group for the game.  I haven't met any of these folks and didn't know if they had any previous gaming experience until last night when he asked me what edition we were running.  I told him Basic, since I'm pretty sure he didn't really care about the concept of retro-clones or publishing rights.

What I got back from him was that his buddy wanted to play a Human Monk and cross-class into Psion.

I've got no animosity towards folks that play and enjoy 3.5, it's just not my bag.  There's a ridiculous amount of prep involved and hundreds of pages of codified rules that can easily lead to super-not-fun arguments between player and GM.  One of the reasons that I'm always looking for lighter and lighter rules sets is because of how much I hated spending countless hours prepping for super-complex games (3.5, GURPS, Shadowrun 2nd Edition, etc...)

But the more and more that I think about it, it's less about rules sets and more about players and expectations.  Apparently this dude is a bit of an instigator and is willing to argue.  Ryan described it as part of his charm, but it instantly raised my hackles.  One of the things that I absolutely NEED in my gaming experiences is for everybody to be on the same page.  We're getting together to play some elfgames and have some fun; I'm not out to screw anyone over to boost my ego or act out weird power fantasies.  But by that same token, I need my players to trust my rulings and go along with what we're doing, especially if I'm house ruling and improvising as much as I plan to.

So what the hell do I do?  I'm tempted to just scrap the idea of D&D all together and go with a non-D&D RPG, just to avoid the whole expectations situation.  But ultimately, I am the guy who's running this thing and by the old RPGNet maxim, no gaming is better than bad gaming.
Posted by Jamie at 2:21 PM 5 comments:

I have a tendency to get hamstrung by the scope of my own settings. The only time I ever tried doing National Novel Writing Month, I got so wrapped up in the internal cosmology and character histories of my detective horror story that the novel itself barely got started in the 150 pages that I wrote.  In the past, I've tried to do Rob Conley-style sandbox development or trying to build a big ol' fantasy city and I always lose steam before I can even get started.  So, naturally, when I started work on this campaign, I went to the internet for help.

I'd never really heard of Stack Exchange before, but there is apparently an RPG board there that offers ranked advice on problems that people have.  On someone's question about 'How to create a D&D setting,' RPG blog mainstay Kelvin Green has some great advice to offer on the topic:


What I would not do:

Try to create a campaign setting.

What I would do:

Make a list of all the ideas and concepts I want to use in the setting. Put the list away and go and make a cup of tea. Go through the list and make connections between the items. Leave all the dangly bits, because I'll find ways to connect them later.

That's it. Really. You don't want to try to create the whole thing from scratch or, and this is important, it will never happen. Start small, start with a bunch of ideas, build outward as the game goes on. Ideas will occur in play which would never have done so beforehand, and best of all, the players will come up with ideas that you can pinch and include.

I've never been able to craft sandbox rumors or the economy of a fantasy city because, ultimately, I really don't care about that stuff.  But what I do like are stupid ideas to make things fun.  I can make everything else in the world bog-standard default D&D for the sake of my sanity and free time, but throw in a handful of fun little tweaks to keep things fresh and unique.

So I've made a list and I've had a cup of tea.  Some of my list covers overarching campaign ideas, some cover new monsters and magic items and some are just fun little setting bits.  I'll start putting up posts on them today.
Posted by Jamie at 11:27 AM 2 comments:

Basic Fantasy: Too Weird to Live, Too Rare To Die

For RPG nerds in general and Old School clone enthusiasts in particular, the question of "which system to use?" is about as close to a spiritual dilemma as they come.  Thousands of forum posts and millions of words have been devoted to defenses of System A vs. System B for use in different settings, needs, styles and formats.  As much as I've said that this new campaign is as "back to basics" as possible, I do have a handful of requirements:
So with all those things in mind, one game stood out. 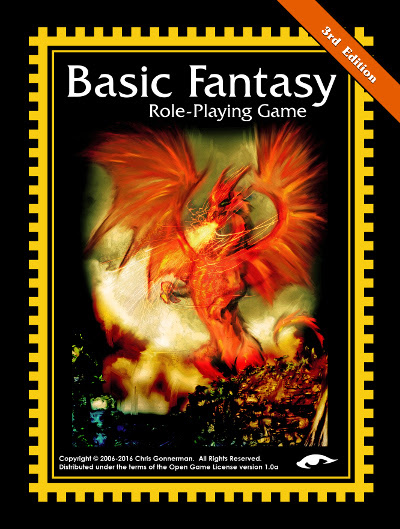 I feel like there are two different types of "old-school games" on the internet these days: your retro-clones that try to exactly mimic the rules of existing out of print games (your Labyrinth Lords and OSRICs) and the games that take an old-school approach or rules framework in order to create something wholly original (your Stars Without Numbers and Crypts and Things).  Basic Fantasy is sort of an odd duck in that Old School Renaissance/retro-clone marketplace.  It makes enough changes to the original Basic D&D rules set that it can't really be considered a retro-clone, but it is still closer in rules and tone to that framework than any other RPG.  For me, it hits that sweet spot with simple, streamlined mechanics that are nonetheless compatible with anything labeled B/X, BECMI, LL, etc.

Like all campaigns, there will be house rules, notably to get rid of the Medicine Cabinet saving throws that Basic Fantasy inherited from Mentzer and Moldvay.  I'll probably replace them with Swords & Wizardry's single save with class bonuses (when did Swords & Wizardry turn into AD&D?) but I don't want to do too much tinkering.  Basic Fantasy gives me a system that I am fairly comfortable following RAW and I want to do that as much as possible.

Thought I'd spruce up the ol' layout since I'm back with a new choice men's adventure movie poster.  To paraphrase Michael Caine, "I have never seen Dark of the Sun, but by all accounts it is terrible. However, I have seen the movie poster that was made for it, and it is terrific."
Posted by Jamie at 11:43 PM No comments:

I basically stopped writing this thing because I hadn't played or GMed a roleplaying game in years.  All of the prep, house rules and roleplaying ephemera was being created with no eventual end goal and it was really getting me down.  In the two (!) years since I last posted, my whole life has gone through a lot of changes and my free-time priorities shifted from solitary bookkeeping to basement shows and tattoo parlors.  I shaved my head and grew a beard, I spent my spare cash on records and a drum kit, and I made some real local friends in the Philadelphia area.

Friends who thought it would be cool to learn how to play Dungeons & Dragons someday.

And when I started to prep for our game, I started revisiting these blogs.  I don't think I'll have to draw a single map thanks to Dyson Logos, I know my friends will all get a kick out of Jeff Rients's Carousing Rules and I met a lot of rad folks through the whole RPG blogosphere, who all seem to still be doing great stuff.

I can't say that anything I'm gonna be doing is groundbreaking.  I'm taking a real back-to-basics approach to this game, since I am now an adult with real life responsibilities and at least one concert to go to every week.  But I am gonna have a hell of a lot of fun on a very limited budget.
Posted by Jamie at 4:18 PM 6 comments:

Please Advise: The Effects of High Temperatures on TSR Products

A question that I think only the assorted RPG blogosphere could answer:

I'm having my current apartment heat treated for bedbugs at the end of the week. This entails heating everything in the room to a temperature of over 150 degrees F. I happen to have a fair amount of board games, RPG boxed sets and polybagged comics and modules about this apartment.

Does anyone have any experience with the effects of high temperatures on these sorts of items? I can seal them up in plastic bins and drop pesticide strips in them, but they'll have to be in there for a minimum of 3 weeks.
Posted by Jamie at 3:23 PM 4 comments: