Retro-Stupid: How I Learned to Stop Worrying and Just Wing It

Now that I have a little bit of disposable income, I've decided to take a look at buying a few quality board games. On top of classics like Carcassonne and Dominion, I discovered a new card game called Epic Spell Wars of the Battle Wizards: Duel at Mt. Skullzfyre. 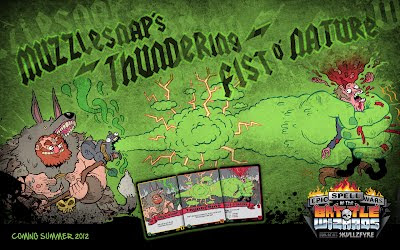 The art for this game is the best kind of bonkers - weird Superjail meets Adventure Time fantasy with exploding heads and sentient testicles murdering people. On top of that, it is hella inspiring. It reminds me of the best parts of the Retro-Stupid style of Dungeons & Dragons practiced by a fair amount of people in the RPG blogosphere: anachronistic, tongue-in-cheek, and low-prep craziness. And it got me thinking.

I've been trying to muster potential players for the Vomorhin campaign that I have been preparing, but putting together a house-rule set for Swords & Wizardry, designing a city (which is by far the hardest fantasy setting to create) and work out political alliances and a thematically accurate world has frankly been a pain in the ass. So what would it be like if I just didn't care about how the world was put together?

I texted my friend Ethan about the idea:

8:11 PMme: Wanna play in a retro-stupid as hell D&D campaign? Basic Box style with weird video game-style boss monsters and magic that makes people explode?
Ethan: Yeah, you've been trying to do that a couple times now!
I wanna be an orc
Or an ogre
Smash.
8:12 PM me: Gotcha. I will write an Orc class.

As one of the most powerful and least sane wizards of his time, Creeshus made a number of pacts with nefarious entities in his time as the ruler of Vomorhin. Some were simple transactions of life for power, some wanted artifacts or the delivery of prophesied do-gooders, but others were more... personal in nature. As a result of these consortings, Creeshus was blessed with four children of various monstrous heritages. But life in Creeshus's towers was often as unstable as the rest of the city. If he wasn't meddling in their affairs and trying to shape them in his own image, he was outright ignoring them or imprisoning them in a pocket dungeon dimension.

It was years ago that the four siblings came to their decision. Though their circumstances were vastly different, each knew that the city could not survive with their father as its ruler. However, none of his scions wished to take his place on Vomorhin's throne; the potential for betrayal and infighting was too great. So the decision was made to open the city to a new form of government, but one that could not touch the children of Creeshus. Each would have their own domain over the city, from diplomacy to city defense, where they exercise their influence over Vomorhin without ever officially ruling.

The new government of Vomorhin may be overjoyed at their new functioning economy and rising place in the world, but no one harbors the illusion that they are in control of the city. The whole experiment continues under the watchful eyes of the children of Creeshus and every civic leader knows that it could all be burned to the ground if they ever decide to change their mind.
Posted by Jamie at 3:22 PM No comments:

A full-time job and an impending move to a new apartment haven't really left much time for idle pursuits, including Dungeons and Dragons. But all work and no play has often left Jack a dull boy, so I've been thinking about getting back in the saddle for a few weeks now. In my current situation, tabletop gaming has been a great way to both stay in touch with distant friends and make new ones in the greater Philadelphia area. In preparation for this eventual calming, I've been working on a little experiment.

The City of Vomorhin is a project that I've been planning since I put my ideas together for the Cheap Minis Project: a city setting that utilized many of the strange, common or otherwise minor parts of the Dungeons & Dragons experience in order to craft a campaign setting. There's a place in the Vomorhin universe for kenku, grimlocks, troglodytes, krenshar, chaos creatures and constructs of all shapes and sizes. Taking all of these disparate elements and making a coherent world out of them has been a blast.

As of now, I have two potential gaming groups lined up and only a limited amount of time each week to plan for a campaign. So my plan is to run two different campaigns, two different rules systems, one central setting.

My online group consists of close friends from college spread out across both coasts of the country. For rules, we're going to be using a modified Swords & Wizardry, incorporating ideas from Akrasia and the most recent D&D Gamma World into the basic S&W framework. My in-person group potentially consists of new players and a pair of local friends. That game will be run with 4th Edition rules.

I have never GMed either of these systems, so I'm looking forward to seeing how the implicit rules of each work in a big fantasy city setting. The S&W campaign is more likely to be in the 'Heist D&D' millieu, with caper planning and specialist hirelings needed to pull off huge scores, while the 4th Edition campaign will be more like hard-boiled fantasy fiction where the players unravel conspiracies, butt heads with prominent factions and change the face of the city.

The vast majority of my campaign preparation will be system-agnostic and, through Fistful of Coppers, available to readers for free. When I do stat up monsters, NPCs, magic items and the like, I will try to do so in both S&W and 4E terms. In terms of fleshing out the city, I'm starting with the overarching story of the city detailed in my most recent post and trying to fill in details as I go.

The next dispatch from Vomorhin will take a look at each of the scions of Creeshus and their place in the city. Stay tuned!
Posted by Jamie at 12:21 PM 4 comments: