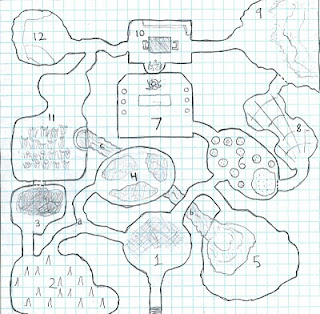 It's done! Posting from a public library in the Adirondacks, here's the Red Lotus Caves of the Blind Minotaur, a One-Page dungeon (potentially?) suitable for 5-7th level characters! This is the first dungeon that I've ever made, in ANY game system, so I don't have a whole lot of experience with it, but I hope that my enthusiasm made up for it.
Enjoy!
Posted by Jamie at 1:36 PM No comments:

Background: The Red Lotus Caves of the Blind Minotaur are the illusory prison built to hold Korthos, exiled prince of the Minotaur Hills. Once a promising noble, Korthos was slowly driven into madness by secret application of the hallucinogenic red lotus by a sorcerous rival and led to the cave by invisible voices. Though continued exposure to the lotus has rendered him unable to navigate the labyrinth of the caves, his rival has nevertheless constructed a prison designed to keep Korthos docile while disposing of any explorers or adventurers that may stumble upon the site. As far as the surrounding towns or cities know, the Lotus Caves are inhabited by a vicious troll who kills anyone who dares venture to the cave.

Room 1: Cave Entrance - The entrance to the Lotus Caves is guarded by a vicious, great-axe wielding troll who delights in his work. This stalactite-filled antechamber is as far as any previous adventurers have reached. Among the mutilated corpses of the fallen, you can find 65 gold pieces and a set of +1 chainmail, alongside shattered weapons and rended armor.
Posted by Jamie at 10:02 PM No comments: 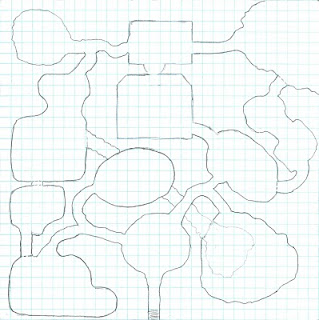 And here it is: The Lotus Caves of the Blind Minotaur, the first dungeon that I have ever mapped out. 12 rooms, with nearly half of them separated or disguised by illusory magic.

I hope this blows your socks off, Ben Laurence.
Posted by Jamie at 7:52 PM No comments:

I've been working on this weird dungeon/prison/asylum for Zak S's Secret Arneson Gift Exchange and it's much harder than I thought. I have the ideas for some encounters and rooms pieced together, but every time I get the graph paper in front of me, I suddenly freeze up and have no idea what the hell to do.

It took me until today to realize this, but I have never created a dungeon before.

The first RPG that I bought was Shadowrun 2nd edition. I know, I know, probably not the best game for a completely new player. Hell, I don't think I ever played it right. I just looked at the pretty pictures, read the fluff (which I became enamored of) and tried my best to figure out how much a 6L pistol shot really did. I'm not sure I ever figured it out. The first version of D&D that I ever ran/played was 3.5, which involved a group of pardoned prisoners fighting against a necromantic plague controlled by evil wizards; a sort of sword and sorcery Suicide Squad. In all the games I've played since then (which have been relatively few, compared to how many books and Mead notebooks I own, but more on that later) dungeons have never really been a priority.

I am super thankful for ChicagoWiz's One Page Dungeon template, precisely because it's giving me some constraints on how I want to build this sucker. Albeit, I may exceed some of these guidelines, with flavor text and similar wankery, but it feels good to have a goal. Now I just need to figure out how many rooms are a good amount and how to tie the concept of a dungeon meant to keep something in, rather than keep adventurers out together.
Posted by Jamie at 10:04 PM 2 comments:

A poll to the public

Today while I was working, I asked Ty, one of the library's regular teen visitors, if he would be interested in a Dungeons and Dragons program. His response?

EDIT: I want to make this introduction to RPGs as fun and inspiring as possible and encourage them to try and play them in their own free time outside of the library. This is going to be a first step, hopefully towards a wider appreciation of different games that may include retro-clone or original D&D games. But in all honesty, I don't think that a game like Labyrinth Lord or Swords and Wizardry is going to spark these kid's imaginations. As I mentioned in my first Elesyian Fable post, kids these days aren't really interested in the material that inspired earlier editions of D&D. They want to be heroic from the get-go, shutting down coup attempts, diving Indiana Jones-like into tombs of forgotten gods and generally having a badass cinematic time of it. THERE IS NOTHING WRONG WITH THIS.

I'm still probably going to continue work on the Elesyian Fable game, and who knows? Maybe I'll get the chance to play it with some teens or younger kids in the future. I really would like to create a B/X derivative game that's angled towards kids who've never gamed before, but are familiar with whimsical fantasy like the Legend of Zelda and One Piece. But for this particular instance, I think 4e Eberron is going to be for the best.
Posted by Jamie at 5:59 PM 6 comments:

Has anyone thought of using the Captcha-style random word generation as a D&D name generator? I just posted on Drance's most recent entry and the Captcha it gave me was Perethes, which to my ears sounds like a totally rad name for a PC, a mountain range or just about anything you could think of.
Posted by Jamie at 6:12 PM No comments:

I'm very fond of elegant mechanics in RPGs; systems and tricks that are novel, simple and utterly functional. My favorite RPG of all time, Greg Stolze and John Tynes' Unknown Armies, is full of these wonderful little bits of mechanical inspiration. Flip-flopping percentile dice, the Hardened and Failed notches in the Madness Meters, the different levels of skill checks, Focus Shifts... the list goes on and on. With that in mind, here are a couple of mechanical solutions that I would love to integrate into my eventual Wild West retro-clone (if their authors are willing, that is.)

-Robertson Games' Aiming and Evasion rules: Very much like Unknown Armies' Focus Shifts, this is probably the most straightforward and still mechanically satisfying way to cover active evasion, without bogging down into minute bonuses and penalties. They would work perfectly in a Wild West firefight setting.

-Tales of the Rambling Bumblers' Super Simple Combat Maneuvers: Now this is what I'm talking about. Taking the finicky nature of 'what penalties do I have if I want to disarm him?' and reducing it to its utterly simple core. If you hit, you disarm him, unless he wants to hang on to his sword so much that he risks his life and takes the hit. I'd go beyond just my Western game and suggest that anyone who's looking to add a little 'rulings, not rules' to their Classic D&D game should definitely check these out.
Posted by Jamie at 11:55 PM No comments:

I work as a page at an inner-city library in Pittsburgh, mostly shelving books, helping people with computer issues and supervising the weekly Lego club. In the past week or so, I've been talking with my supervisor about potentially running a Dungeons and Dragons club for Teens in the early Fall once the school year has started again and the library needs programming. Naturally my mind first turns to the early editions of D&D that I've been discovering, but the more and more that I think about it, the more difficult I feel that it would be for modern teenagers to go head first and enjoy an unmodified game of B/X or AD&D. Kids today aren't inspired by cheap paperbacks, Star Wars, comic books or the art from Magic: the Gathering cards like I was when I first started role playing. If I asked one of my Lego club members what the fantasy genre means to them, I'd get answers that spread from video games to young adult novels to anime and manga.

NONE OF THIS IS A BAD THING. It just requires a different approach, one that I think a Basic D&D-inspired game could accomplish very well. A simple rule set, modular enough to allow every character from fighters to magicians to have something special up their sleeves, combined with a 'rulings, not rules' aesthetic, but incorporating elements from sources that kids would recognize and understand.

It's gonna have airships, quests to save the world, ridiculously named swords, the summoning of magical beasts and godly avatars, and hopefully, it'll be a great introduction to roleplaying for a group of kids who would probably never have come to it on their own.

(Picture from a cutscene in Final Fantasy IX)
Posted by Jamie at 11:43 AM 4 comments:

Though often seen as an anachronism by those who swear by hot lead and a hair trigger, men and women who specialize in melee combat are still a force to be reckoned with. Wandering samurai, Indian braves and even barroom brawlers all feel more comfortable the closer they are to their opponent.

Fighter Class Abilities
Killing Blow: If the Fighter successfully reduces an enemy to 0 hit points, they can immediately make an additional attack against any enemy within melee range.
Signature Weapon: At character creation, a Fighter chooses a signature weapon to specialize in. When attacking with their signature weapon, they gain a +1 bonus to hit on attack roles and a +1 bonus to AC in melee combat. If the Fighter chooses to specialize in unarmed combat, their unarmed attacks deal 1d4 damage and increase by one die size every two levels.

(Wild West Samurai picture by bithartist.)
Posted by Jamie at 10:51 PM No comments:

A master of ranged combat, the gunslinger can wield anything from Winchesters to throwing knives with deadly accuracy.

Gunslinger Class Abilities
Saving Throw Bonus: Gunslingers gain a bonus of +1 on all saving throw rolls against area attacks.
Fanning the Hammer: While wielding a weapon with an RoF of 2 or greater at half range, a Gunslinger makes one attack per level each round against enemies with one hit die or less.
Posted by Jamie at 9:18 PM No comments:

Some thoughts I had while riding the Greyhound from New Jersey

- The aforementioned 'blind minotaur' is Karthos, exiled prince of the Minotaur Hills, driven into madness by secret application of the hallucinogenic red lotus by a sorcerous rival and led to the cave by invisible voices. He has not left the caves in almost five years and in that time has grown more and more addicted to the lotus, losing his ability to navigate the illusory maze of the cave. His only companions are three goats and a single black raven, whom he converses with as if they were equals. In truth, all three are transformed imps in the service of his rival, who speak to him in order to further his madness. If confronted by the PCs, Karthos will engage with them bemusedly, having not seen anyone outside of his own hallucinations for some time. If there is any chance that the PCs could convince Karthos to leave the cave, the imps will revert into their natural form and attack. This causes Karthos to fly into a rage and attack anything within range, preferring the imps to PCs.

- The Red Lotus Caves are not only disorienting and hostile, but many sections of the walls are not as they appear to be. Many sections, including the entrance and exit of the caves, have been disguised with illusory cave walls designed to prevent Karthos from ever accidentally leaving the cave.

-This room contains several green luminescent pools, each containing a kelpie that will attempt to entice anyone who gazes too deeply into the depths.
Posted by Jamie at 9:50 PM No comments: