So apparently Edition Wars are still happening, which makes me very glad that all the blogs that I follow are full of creative and positive people who don't really truck with the whole "My Edition is better than yours and you should feel bad for liking the things you like" bull honkey. I just can't understand that kind of mentality.

What I can understand is "this edition of the game doesn't really fit my playstyle or what I imagine D&D to be like." One of the common sentiments around the blogosphere is that people's personal backlash against current editions of D&D would be lessened if the game was called something else or had a different focus other than dungeon bashing and exploration. So why not shift the focus, genre or style of games to offer a potentially more enjoyable alternative?

I've been reading a pretty fantastic young adult novel called Leviathan by Scott Westerfeld, the author of the Uglies and Midnighters series. It's a rollicking adventure story set on the outbreak of World War I, where the war is not only fought between the Central and Allied powers, but between diesel-powered war machines and genetically modified beasts of war. The titular Leviathan refers to a British airship created from the genes of over 100 animals, built in the 'chassis' of a sperm whale. Keep in mind that all of these fantastic creations are illustrated by Keith Thompson, whose art you've probably seen if you like awesome gaming inspired work. 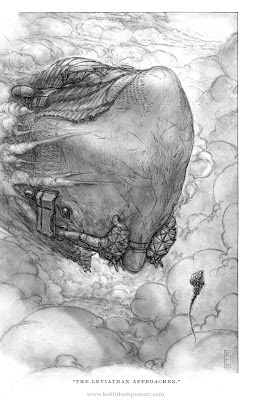 Badass.
The interesting thing about World War I as a potential adventure setting is its comparative ambiguity when compared with gaming in its sister conflict, where you can't really have a whole lot of PC sympathy for the Nazi war machine. Saying that Germany and Austria-Hungary are the "bad guys" of the piece isn't really a nuanced view of the war as a whole either? So who can serve as the antagonists for a ragtag player group of potentially mixed nationalities?
There's another World War I based fantasy RPG that I'm fairly fond of, but a console rather than pen-and-paper game. The Shadow Hearts series are Playstation 2 RPGs set in the early part of the 20th century that play fast, loose and goofy with actual history: Al Capone can be allied with a gangster cat who knows drunken boxing and your adventuring party in Revolutionary Russia can consist of a puppeteer who fights with a marionette of his dead daughter, a flamboyant vampire pro wrestler and a magical camera-wielding Anastasia Romanov. The combat system of Shadow Hearts - Covenant actually reminded me of 4E's area effects and strategic maneuvering, which put the game in my mind when I was reading Leviathan.

Regardless, the villains of the Shadow Hearts games are generally ruthless or driven individuals who want to take advantage of the misery and malice that the Great War generated and use it towards their own dark purposes, generally world-destroying chaos. As Chaosium has noticed before me, World War I is a great setting for investigating and battling mind-destroying horrors, both human and extraplanar, and the Shadow Hearts games feature plenty of Cthonic monstrosities and creatures brought into being from physical and spiritual trauma.

Cthonic monstrosities and creatures brought into being from physical and spiritual trauma that you are supposed to PUNCH IN THE GODDAMNED FACE. Though there may be doubts and introspective dread, none of that should prevent you from giving them a sound ass-kicking.

So yeah, that's my framework for a reimagining of 4E to take it out of the dungeon and into left field. Next time, I'll be working on character creation and how to make classes your own with the magic of reskinning.
Posted by Jamie at 11:25 AM