It's been a while since I've actually looked at the spreadsheet that I put together for the Cheap Minis project, so I decided to go through the list and see, in broad terms, what I have to work with, as well as any standout awesome minis that I have come across.

There are 303 Dungeons and Dragons miniatures that cost $1.50 or less at CoolStuffInc (the prices at Troll & Toad are fairly similar, but there are exceptions) across each of the 21 expansion series. The vast majority of these minis are Medium-sized, occupying a 1" square and around the size of a standard human. Only 15 of these minis are labeled as Large, or taking up 2x2" on a Chessex-style map.

As I somewhat expected, humanoids and monstrous humanoids take up the bulk of the monster selection: races like humans, elves, dwarves and the like account for 43% of the list and monstrous races like goblins and orcs account for another 23%. The remaining third of the minis include a fair amount of both constructs or animates and undead, outsiders and both mundane and magical beasts.

I'll tackle each of these sections in the future, but for now, I'll post a few standout minis that I think would be an inspiration for any DM looking for cool monsters or PCs.

A great cultist model for any murderous sect. 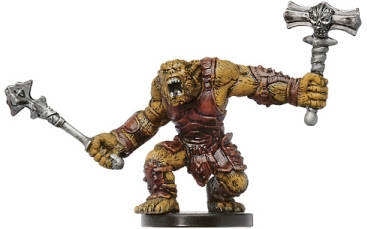 I've always had a soft spot for bugbears and this dude totally reinforces that. Angry, well-armed and ready to wreck you. 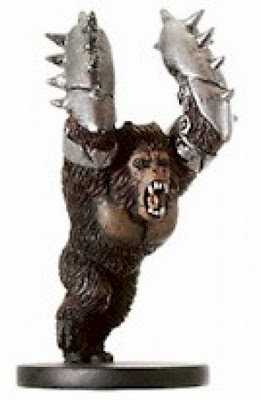 Just like it says on the tin. An ape that is ready for war. I really dig the spiked gauntlets/restraints on him. Maybe his race were forced into battle. 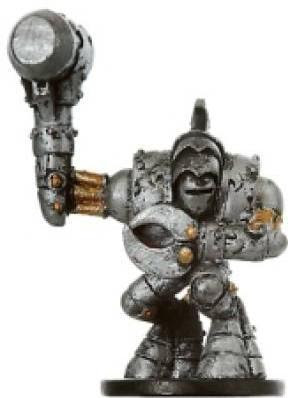 One of a number of great constructs and golems in the cheap minis collection. This one's a little more gear-driven than others, but that hammer hand really sells me on it. 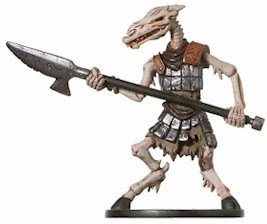 Some sort of awesome man-horse that's also a skeleton and has a big ol' spear.

There's plenty of cool stuff to work with, even when your price range is limited.


All miniatures are creations of Wizards of the Coast. Images from CoolStuffInc.
Posted by Jamie at 4:07 PM